The enchanting images in this address book spring from the unfettered imagination of Richard Doyle (1824 – 1883). Hailing from London, Doyle in his childhood studied with his father, who was also an artist, and received training in the shop of a wood engraver. Later, he enjoyed a successful career as an illustrator at Punch, where he drew political caricatures and designed a cover that the magazine used for more than a century. He left that position in 1850 for the world of book illustration, a pursuit he had dabbled in while employed at Punch. The talented artist had a penchant for the whimsical and contributed his visions to such works of fantasy as Grimm’s The Fairy Ring and Ruskin’s fairytale The King Of the Golden River, as well as creating more straightforward illustrations for books like Thackeray’s The Newcomes. But In Fairyland, or Pictures from the Elf World (1870), originally accompanied by a poem from Irish poet William Allingham, shines as Doyle’s crowing achievement. This incredibly popular work still retains its appeal today. The 40 illustrations presented here are taken from In Fairyland, part of the collections of the Bodleian Library at Oxford University. Each image is accompanied by a quotation about fairies.

Be the first to review “Fairies by Richard Doyle” Cancel reply 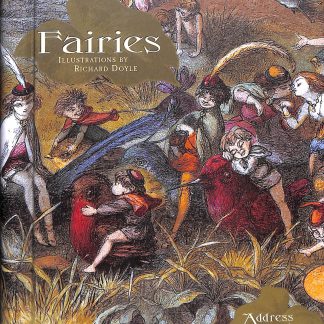 You're viewing: Fairies by Richard Doyle $19.95
Add to cart