The Rough Guide: Music of the Gypsies

The album starts out with an example of modern flamenco from Pata Negra, then moves into Italian gypsy music and an ultra-high-speed number from the Romanian Fanfare Ciocarlia. It then moves immediately into a slow lament from Greek singer Eleni Vitali. From there, it progresses into Rajasthani music, and then back to Asia Minor with a group from Istanbul. A selection from Albania follows, followed itself by the new ambassadors of gypsy music, Taraf de Haidouks. Another Greek musician makes an appearance, followed by a pair of flamenco works, one from the guitar master Tomatito and one from El Indio Gitano and Gerardo Núñez. Finnish gypsy love songs and English harmonica-based folk songs follow. The album then returns to the more prototypical gypsy sound, with a Hungarian group reminiscent of early klezmer in many respects. A shawm-based dance from Kosovo follows, providing a look into the practice of instrument adoption into a culture. The album finishes off with cimbalom master Kálman Bálogh and his arrangement of a traditional number based on styles from Spain, Hungary, and Romania (the Spanish influence is particularly noticeable). Great album for a nice overall look into music of the gypsies. (Excerpt from a review by Adam Greenberg)

Be the first to review “The Rough Guide: Music of the Gypsies” Cancel reply 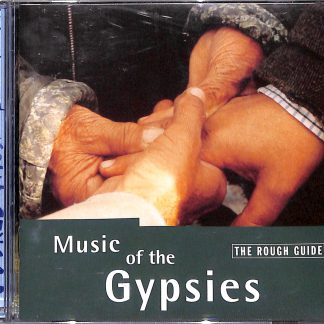 You're viewing: The Rough Guide: Music of the Gypsies $13.98
Add to cart