In 1982, The Grateful Dead drummer, Mickey Hart, teamed up with Tibetan bell virtuosos, Henry Wolff and Nancy Hennings, to create a uniquely expressive journey to the mystical roots of percussion. It has been critically acclaimed for its subtle, yet masterful percussion soundscapes. Yamantaka is the Tibetan god of the dead and lord of the underworld. Hart, Wolff, and Hennings have succeeded in portraying these Tibetan legends of afterlife through a quietly evolving collage of sound.

The six-part suite Yamantaka is at once somber, mysterious and meditative. ‘The Revolving Mask of Yamantaka’ raises the level of intensity through whirling rhythmic gyrations, spectral harmonics and the cyclical resonations of the Tibetan bells. Celestial Harmonies’ remastered version of Yamantaka also features three bonus tracks composed especially for this CD reissue. Recorded digitally in July of 1991, the last three tracks were performed by Wolff and Hennings with special guest Brian Keane. The resulting collection of sounds offers a stirring portrait of death and judgment.

Be the first to review “Yamantaka by Hart, Wolff, & Hennings” Cancel reply 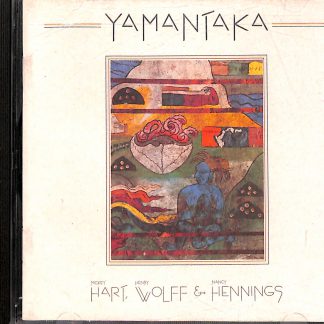