Early Warnings by Holly Near

With Holly Near’s Redwood label having gone bust, sending all her early albums out of print, Appleseed brings back tracks from two of her 1980s releases, Watch Out! and Skydances. Near points out that most of the songs derive from the Reagan era and represent early warnings for political storms that are here today. Watch Out! was a timely collection of topical songwriting set to a folk/bluegrass/acoustic new age musical palette contributed by John McCutcheon, Barbara Higbie, Michael Manring, Darol Anger, and others. “Don’t Let the Singer Down” co-written with Jeff Langley, paints a powerful image of eagles flying across the sun, rainbows spreading across a nighttime sky, and mountains tumbling down, all in an upbeat, almost theatrical melody, yearning for a world without war. On the anti-war anthem “Watch Out!”, Near’s forceful vocals charge an articulate warning on approaching war, powerfully backed by McCutcheon on hammered dulcimers. “Sun Won’t Stop”, brings hope that “the sun won’t stop rolling around in the sky” with accompanist John Buccino’s touch of jazz on piano. “Skydances” is a Native American celebration of the natural world written by Jimmie Durhan and Roy Brown, which Near made her own – meeting sky and earth with her voice trailing up and down, and Bucchino’s light piano dust of magic. The last track, “Quiet Early Morning”, recorded in honor of Pete Seeger, calls us to keep on going, even in our darkest hour. 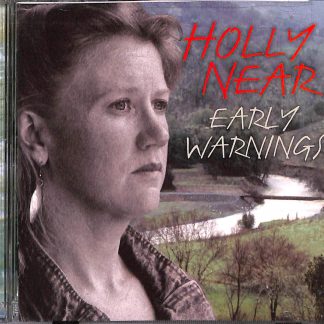 You're viewing: Early Warnings by Holly Near $16.50
Add to cart