Only 2 left in stock

This festive flute CD features Andalin Bachman on the white/gold/platinum Miyazawa flute. It fuzes beautiful Middle Eastern / Mediterranean scales and rhythms with jazz improvisation, progressive rock and just the “right amount” of classical commentary. In fact, this CD includes perhaps the only world dance version of Beethoven’s Moonlight Sonata. The flute part is amazing, and now flutists will be able to play along with their own melody!

This delicious musical blend is both soothing and exciting. Full of surprises, from the opening thunder (recorded live from the studio window) to the the ending rock guitar / flute duo, Desert Wind has taken this instrumental music to a new level. Zjari adds the perfect vocal touch to Flute Voyage, Andalin’s Song and Downtown Beladi. Flute Fest is a showcase of flute talent, which flutists can refer to in embracing numerous musical styles! From Parthenogenesis to Disco Beladi, exotic Middle Eastern / Mediterranean rhythms and scales take Andalin’s passionate jazz / rock fluting to a whole new level!

Return of the Tribes 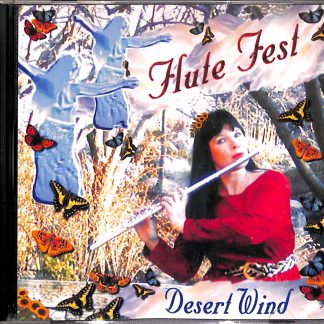 You're viewing: Flute Fest by Desert Wind $14.98
Add to cart