This oratorio by Kay Gardner for 6 female soloists, women’s chorus and orchestra, is set to exquisite solo texts by Charlie Hutchins and powerful chants texts by Ila Suzanne. It’s a live recording of its premiere performance at the 20th National Women’s Musical Festival in Bloomington, IN, and is one of the largest-ever classical productions featuring women musicians: 84 voices, 40 orchestra members. The work celebrates the ages of Woman with each age corresponding to a holy day on the ancient Celtic calendar, is strongly centered in female spirituality and relates to the birth/death/rebirth cycle.

Be the first to review “Ouroboros: Season of Life by Kay Gardner’s Oratorio” Cancel reply 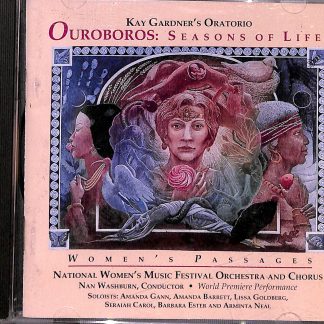 You're viewing: Ouroboros: Season of Life by Kay Gardner’s Oratorio $15.75
Add to cart